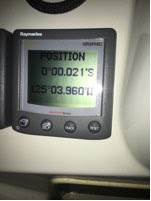 Hello all! We're still out in the ocean, and we've traveled about 400 miles since our last post, but it still looks the same! Rolling water as far as the eye can see. It would be hard to grasp the idea that we actually are moving if it wasn't for our track on Navionics, and our ever changing lat/long position.

We followed our latitude quite closely this morning because.... (drumroll please)....we crossed the equator! Sailors take our crossing of this imaginary line quite seriously, because in ancient tradition, upon crossing the equator by boat, one must make offerings to "King Neptune" to ensure a safe passage on. After doing so, one changes from a "polywog" (someone who has not crossed the equator on a boat) to a shellback (someone who has). Sailors have a lot of fun with this - bringing shells to toss into the sea (like we did) and ridiculous costumes to wear during the celebration. We broke our dry boat rule for champagne (and poured a little for Neptune of course), munched on some delicious chocolate peanut butter balls, put glitter on our faces, wore fake flower leighs, and shiny colorful necklaces, played our theme song ("Southern Cross" by Crosby Stills) on the guitar, opened a gift from our dear friends on Sooner that's arriving in Hawaii this week, and we each kissed the toy fish Anne brought from home. Anne also brought gifts for us from home - baseball caps that say "girls kick ass," a memento from her life long ago that applies so well to our adventure these days. We do kick ass and we're proud of it! It was a good way to lift our spirits as we head into our final week of the journey! We're all starting to itch for land, but it's just around the corner.

Some other highlights from this week:

"What time do you guys want sunset to be?" :
One cool thing about being out here all alone is that we can make our own decisions about things like time change. Nobody cares but us. So as we headed further and further west, sunset was naturally getting later and later and eventually a time change would be in order. We technically pass through 4 time zones on this trip, but decided we'd just change our clocks once in route and once when we get there in order to not mess with our watch schedule too much. We ended up switching our clocks back two hours on Saturday at sunset (much less confusing than in the middle of the night since everyone would be awake). We even had the whole day planned out so that everyone did a half an hour more of their afternoon watch to make up the time. The result was a strangely normal but stretched out day, in which I somehow finally found the time to journal. Coincidentally the same morning, we all discovered our phones had jumped forward an hour and we couldn't figure out why. Connie saved the day by determining that day was daylight savings for Mexico... where our poor phones that haven't been connected still think we are. That of course resulted in some confusion over watches. I, for example, showed up at 3am instead of 4 for my watch and laughed at Anne when she looked perplexed that the time had passed so quickly... the joke was on me.

A ship!
It wasn't a mirage.... it was a real ship (at least we're pretty sure, but who can tell anymore). Captain Diana spotted it in the distance a few days ago, (on the same day that Jeff sent us the news that apparently there is only one place in the world further away from land than we are now), and she nearly yelped. It had giant cranes so it was easy to spot, and we watched it come closer and pass behind us on it's way to Ecuador (or so the AIS said). Connie said the most profound thing I've heard on this trip so far: "I wonder if they have any bananas."

The last night of squalls:
In the last post, I think we told you that we'd finally made it through all the brutal squalls that kept us up through the night. Well we're learning not to jinx ourselves, because another happened that night, and it wasn't pretty. At this point, all of our squall experiences are blurred together. Often, we'd wake up in the morning and someone would remark about what it was like ("wasn't that crazy?!") when so and so had blown the whistle last night. And more often than not, someone else would scratch their head and say "wait we all got up last night? Was that really last night? Was I sleep walking?" Especially since we all basically have two bedtimes (because of overnight watches), it's difficult to remember exactly when something happened. We're currently enjoying some beautiful weather thank goodness, and praying that we won't encounter another squall. MVP of storm navigation? Connie, who was smart enough to bring her ski goggles on board. Yep - that's how much rain we had.

Swimming:
One day when we hit some very light winds, a few of us decided to hop in the water and trail behind the boat. What a cool experience to be swimming right smack in the middle of the Pacific! We were super careful of course, wearing a bright orange life jacket, and attached with a rope. We only let ourselves back a couple feet from the boat max. You'd be surprised how strong the pull is even when the boat is just trudging along at 1 knot.

Whales!
You might be surprised to hear that we don't see much wildlife out here at all. The occasional pod of dolphins, flying fish, and a few birds just about sum it up. But today just before our celebration, we saw two whales (which we believe to be sperm whales) just a bit off the starboard side. It was so nice to see something new and exciting!

Fairy dust: Anne asked me one night "did you see the fairy dust?" I gave her a weird look, until she pointed at the base of the stern where the boat was creating a wake. It was literally sparkling with phosphorescence and absolutely was what fairy dust should look like. It was beautiful, especially coupled with the milky way and shooting stars that night.

Cruiser sat net: We keep forgetting to mention that Anne is posting daily baby blog posts for our fellow sailors. They're written well, and probably have more navigation/weather detail than I'm giving here. You can follow them here:
https://cruisersat.net/net/ppj2019

To track our location:
https://Cruisersat.net/track/arctic%20loon