We have a huge thank you for local Polynesian Salis and his buddy who braved the torrential South Pacific thunderstorm to get us safely back to Arctic Loon in the dark.

It all started with a simple kayak trip to drift snorkel in the South Pass at Fakarava to see the Wall of Sharks. We saw the black tip sharks but sadly not the live coral that had been promised. After snorkeling through the pass, our clue was that the outgoing current began to build making it hard to snorkel. We stopped at the local dive shop overlooking the water for a beer and to download our email. $5 for 12 hours but has a 300mb limit so goes quick.

Then the fun began, Diana and Anne got in the two kayaks and Agatha (Bill and Victoria) got in their dinghy along with our crew mate Robin. We got out to the reef marker and the current stream was too strong! Agatha tried to tow us, but they also could not fight the current. So back to the bar for another beer to wait for the current to go slack. By now, the sharks had all arrived for dinner time under the deck. The local 4 year old girl's GI Joe fell in the shark infested water. We all debated who would go in when the local Polynesian woman said "Bye Bye to Gi Joe".

Big black storm clouds began to roll in from the East just as nightfall approached. There was no sunset. As the Dive Shop Bar prepared for the coming squall, we knew this was not a little storm that was going to pass by quickly. Just as the new resort guests arrived to Fakarava's Tumakohua Dive Resort at the South Pass, the wind came with a vengeance and the clouds opened up! We were hiding out of the rain trying to figure out how to get back to Arctic Loon and Agatha.

That is when Salis offered to take us back in his sturdy super ponga with the big engine, he said "We need to go now! The wind was howling, it was pitch black and the rain was sheeting sideways so we could barely see in front of us. It was like the beginning of a hurricane when we look back at the video we captured. Now the wild and wet and cold 1/2 mile journey around the reef in the dark torrential rain began. Thank you Salis!!!!! We left the kayaks tied up on the beach and towed the dingy behind us. It was a miracle when we finally reached Arctic Loon in the darkness. We graciously thanked and nicely tipped Salis and his buddy, and they made sure we were safe before they headed back into the stormy waters. We invited Victoria and Bill aboard to watch the lightening and wait out the storm. We celebrated our safe arrival with our new drink Captain Anne's Monsoon which is a blended Pamplemousse with dark Rum! 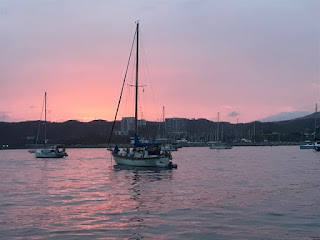 And we're off again!